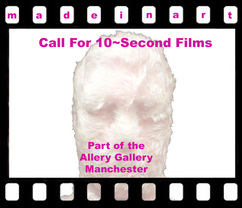 The 10 second film is the Haiku in form and discipline of film making.
10 seconds is long enough to hang you but short enough for you to produce banality.

Jex & Michael like this fine edge and the discipline needed to employ time / image / sound / light / in perfect unison, delivering an idea in the stated time.

Back in 2003 we put together the first 10 second film festival and screened 100 films.
This 10 second Film Festival is to re-awaken that interest and for us to re-introduce it back into the river of culture.

A nice link is Bruce Conner's

“When Conner was commissioned to design the poster for the 1965 New York Film Festival he constructed TEN SECOND FILM, which he intended to act as its television commercial and to precede the film programs in the theater. It was a public ‘leader’ in that it was composed, like the poster, of a series of ten strips of film (each 24 frames long) of count-down leader, seen as fundamental heraldry of motion picture exhibition.” —Anthony Reveaux

The film was rejected.

Employing any image recording device you have to hand, make a 10 second film and send it as a download to

There is no theme.
All films will be shown.
All films sent will be screened in sequential order of arrival.
All films must be 10 seconds long.
No extra content
Just 10 seconds or 240 frames of film as content.

All films will be screened in sequential sequence generating a meta-work.

Go to Maps for Directions to all Venues: